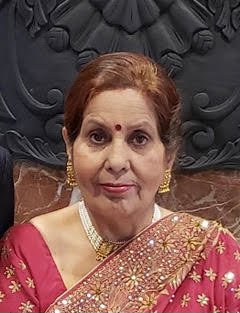 Get Directions
Saturday
15
May

Please share a memory of Ritu to include in a keepsake book for family and friends.
View Tribute Book

Mummy was born on Sep 9, 1946 to Mr. Jai Gopal and Mrs. Prabhat Shoba Anand. She was raised in India and was married to Mr. Om P. Chaddha on Feb 8, 1966. She lived in New Delhi after marriage where she raised a loving family.

Over the past twenty years Mummy spent most of her time with her children and grandchildren in the United States. A devoted wife, a loving and caring mother and an extremely doting grandmother, she spent her entire life spreading love and happiness in her family. She was a pious, strong, patient and perseverant woman who believed in the goodness of humanity and touched everyone she met through her kindness and warmth. We shared Mummy with many others who considered her their mom.

While she is not amongst us today, we know that she will continue to shower us all with her blessings until eternity. May her soul rest in peace.

We love you Mummy and we know you will remain the greatest treasure in our lives.

In lieu of flowers donations may be made to:

Share Your Memory of
Ritu
Upload Your Memory View All Memories
Be the first to upload a memory!
Share A Memory