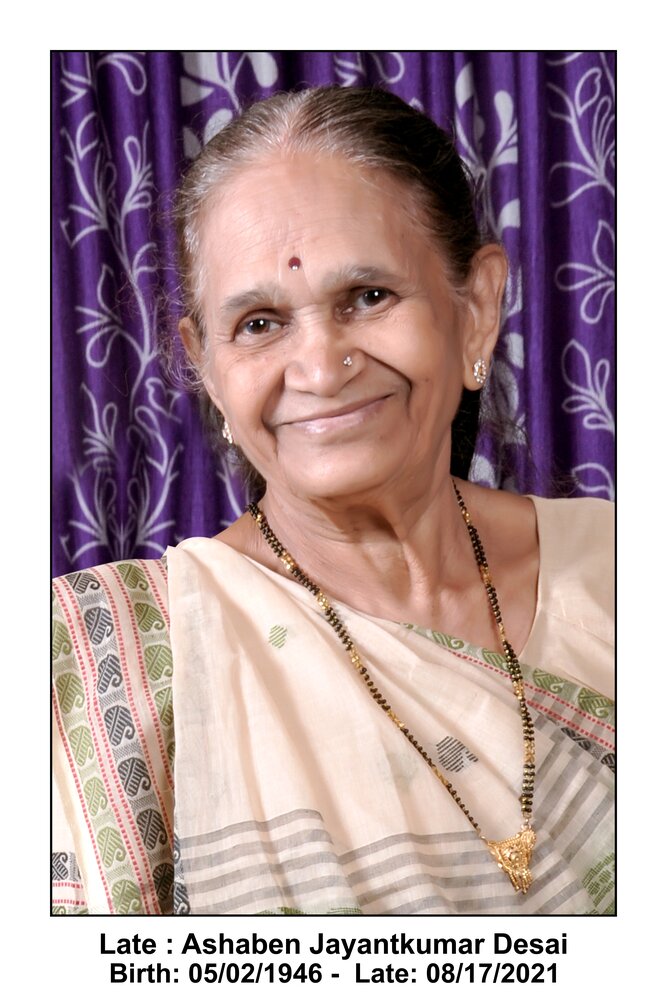 Please share a memory of Ashaben to include in a keepsake book for family and friends.
View Tribute Book

Ashaben Jayantkumar Desai was a loving wife, mother, sister, daughter, grandmother, and friend. She peacefully passed away on August 17, 2021, at the age of 75. She went calmly with the support of her two sons, Utpal and Shehul, her daughter-in-law, Shilpa, and her granddaughters Mahek, Ishani, & Resham.

Growing up in Chhatral, Gujarat, she was the ideal daughter and sister. As a child, she was her siblings’ secondary caregiver , much like a mini-me of her mother, Shanta. Although coming from a poor household, she and her family were fun and loving people; they wouldn't let their circumstances determine their happiness. As a wife and mother in Bardoli, she was devoted to care for her husband and sons. When J.C. was away teaching others, she would be instilling values in her sons at home to which they still carry till date. Ashaben stuck by her husband’s side till his last breath, and you could even call them soulmates. Being a mother, Utpal and Shehul were always her top priority; whether it be scolding them for dozing off instead of studying or nurturing them while they were sick.

She did even more for her granddaughters. She was their confidant, best friend, mother, and grandmother. Asha Baa was a constant in their lives; she played with them as they were toddlers, passed down wisdom through stories, and taught them to become dignified young women. Shilpa never felt homesick with her around, and Asha wasn’t the stereotypical mother-in-law. The two would go shopping together, gossip, and care for one another. Anyone who would have met her would have felt an instant connection; she wouldn’t let anyone leave without having her “cha”. Ashaben’s motherly nature even created a deep bond with the girl next door, whether it be in Bardoli or Iselin.

Share Your Memory of
Ashaben
Upload Your Memory View All Memories
Be the first to upload a memory!
Share A Memory