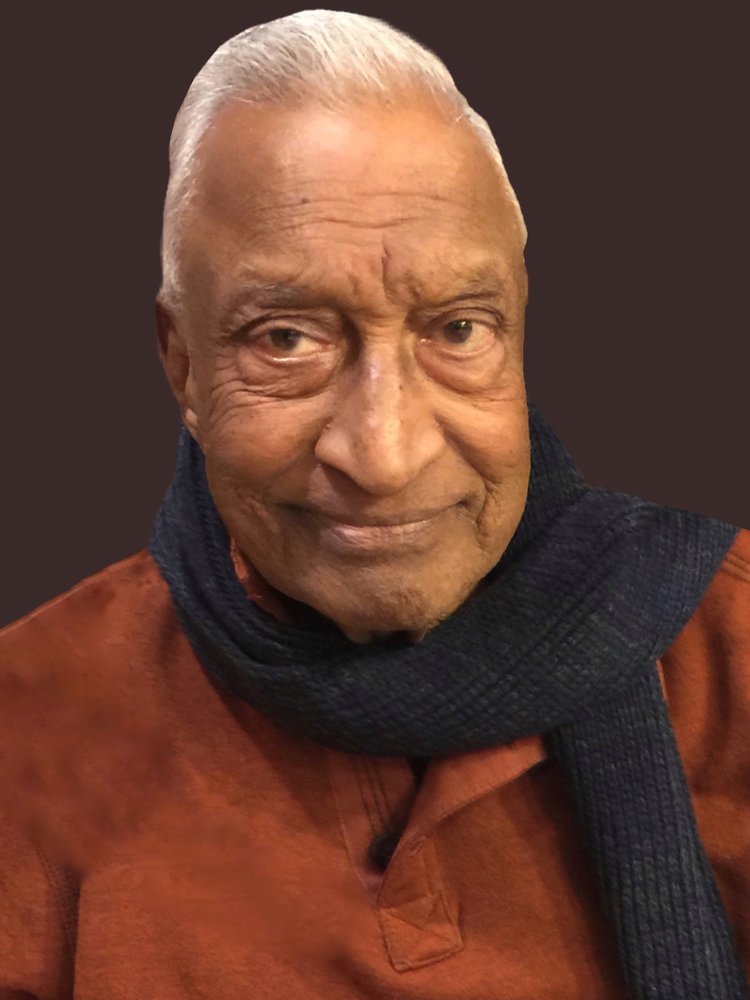 Puja - Family only - Can be viewed via Live Stream

Please share a memory of Krishna to include in a keepsake book for family and friends.
View Tribute Book

Krishna Ramanathan was born on October 28, 1928 in Nallepilly Village in Kerala, India. His parents were Vaidyanatha Krishna Iyer and Saradambal (nee Saradambal Subramanyam). He was given the name Ramanathan to honor the auspiciousness of his birth. Saradambal had two failed pregnancies and, despondent, the couple traveled to Rameshwaram Temple in Tamil Nadu to pray for good fortune and a healthy baby. Ramanathan was the eldest of six children. He had two sisters, Rajambal (deceased) and Alamelu, and three brothers, Viswanathan (deceased), Balu, and Sundaram.

Born poor in a tiny village in Kerala, India, Ramanathan was the first in his family to get a high school diploma and then to graduate from college with a Bachelor of Commerce majoring in accounting. Starting in his first job working for the government for a mere 35 Indian Rupees ($7 USD) a month, Ramanathan continued to further his education, even as he worked to acquire better paying jobs and to support his family. His uncle saw his potential and took him to Calcutta where he graduated college and ended up in a series of accounting positions which culminated with his being hired by a Dallas, Texas-based oil drilling company named SEDCO, whose founder, William Clements, would then go on to become the Governor of Texas and the Postmaster of the United States. Despite suffering a devastating stroke at the age of 38, Ramanathan, or Ram, as he was affectionately called by his colleagues and friends, would go on to have a thirty-year career at SEDCO which would take him and his wife Lakshmi (whom he married in 1958) all over the globe until their arrival in the United States in Dallas in 1981.

Approaching retirement in 1986 and given his love of Indian food, and his wife’s wonderful cooking, Ram and his family opened up a small Indian restaurant in Garland, Texas called Curry In, Curry Out. While the restaurant was not a commercial success as Indian food was not as well-known or as popular in the Dallas area as it is now, it was a hit with restaurant critics. In Nov 1987, Liz Logan of D Magazine gave it four stars and stated “If you are serious about Indian food, Curry In, Curry Out is required eating.”

A comprehensive history of Ram’s life and travels is captured here on this custom Google Map which you can click into and peruse at your leisure: Ram's Life and Travels - Google Maps. There are many details here about his growing up, his marriage, and his incredible as well as harrowing experiences in countries he lived in around the world.

Ram was one of the gentlest and kindest people on this earth. He emanated goodness and had a kind word or helping hand for everyone who met him, no matter their economic status, race, creed, religious background, etc. He was beloved by every single person who had an opportunity to meet him and interact with him.

He loved playing cards. He and Lakshmi were both excellent bridge players and bridge partners for decades, playing in many local tournaments. Since he began dialysis however, they switched to playing bridge online and would play together nearly every day. He also loved playing “56”, a popular Indian trump card game, and was a bit of a ‘56’ card shark, playing with the family up to the day before he passed.

He loved telling long-winded jokes. He often wouldn’t get to the punchline because he himself dissolved into fits of laughter while telling the joke. His favorite jokes tended to revolve around bowel movements, an obsession of his and of many of the elderly it seems ;-) such as the one about “Big Chief No Shit” that eventually led to the “Big Shit, No Chief.”

He absolutely loved Carnatic music. He loved listening and singing. He and his co-in-law broke into an impromptu concert at our limited Thanksgiving dinner this year.

He was a snappy dresser and made sure he was clean-shaven, and his hair and clothes were ‘just so’ for dialysis three times per week and when people came over.

He was a devout Hindu, and despite facing many hardships and poor nutrition in several of the countries, he remained a staunch vegetarian throughout his life and he loved good food, especially traditional South Indian Food.

Until he moved to Texas, Ram enjoyed the occasional Johnnie Walker scotch with a splash of water. After moving to Dallas however, Ram also fell in love with Tex Mex food (as long as it was vegetarian, of course) and especially Margaritas – which were definitely vegetarian! The man was very particular about his margaritas and frequently complained, upon moving from Texas, that he couldn’t get a good one anywhere else!

He is survived by his devoted wife of 62 years, Lakshmi Ramanathan who shared his adventures through thick and thin. He is also survived by his children Shanthi Nathan, Vasanthi Okuma, and Krishnan Ramanathan and their respective spouses, Sridhar Nathan, Michael Okuma, and Sujana Chandrasekhar. He is beloved by his nine grandchildren (Aditya, Nina, Ajay, Keval, Narayan, Kedar, Sajan, Sachin, and Sarika), four great grandchildren (Priya, Asha, Leela, and Aryana) as well as a large and loving extended family of siblings, cousins, nephews, nieces, grandnephews, and grandnieces throughout the world.

Ram passed away peacefully in his sleep the morning of January 19, 2021. We will miss him dearly and, every time each of us thinks of him, we will smile because he brought us only joy and love.

Share Your Memory of
Krishna
Upload Your Memory View All Memories
Be the first to upload a memory!
Share A Memory